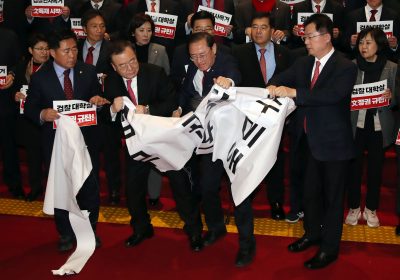 the National Assembly’s request for the prosecution documents indicting 13 individuals, including former staff and other allies of President Moon Jae-in, on charges of unlawfully intervening in the 2018 Ulsan mayoral election.

This exposes alarming signs that South Korean democracy is in crisis under Moon. The 13 suspects include three former senior presidential secretaries as well as Ulsan Mayor Song Cheol-ho and Vice Mayor Song Byeong-gi.

Amid public outcry, even among many supporters of Moon and his ‘candlelight administration’, Choo announced her controversial plan to separate prosecutors into two groups — one in charge of investigations and the other in charge of indictments. She claimed that this decision was aimed at correcting a ‘wrong practice of the past’ and to ensure neutrality.

The Justice Ministry offered a four-page summary of the prosecution’s indictment documents instead of submitting the full 71-page version. Ironically, Choo claims that making indictments public is also a ‘wrong practice of the past’. Yet this practice was established in 2005 by progressive president Roh Moo-hyun as part of his criminal justice system reform ...